It came as a surprise when Lebara Play was sold to Yupp TV - also for London Tamil Media Ltd. from UK, which channels were exclusively only available through Lebara Play. IBC Tamil TV, IBC Tamil Radio and IBC websites were all advertising for Lebara Play. When Lebara Play was transformed into Yupp TV platform, it took some days before IBC channels (IBC Tamil TV, IBC Music, IBC Comedy and IBC Bakthi) became available on Yupp TV and first the channels were only available for Yupp TV subscribers in Europe. Now IBC channels are available in most regions of the world through Yupp TV.

Even if IBC channels are available through the popular Yupp TV service, it seems to be that London Tamil Media Ltd. is planning to launch their own IPTV service called Vadali. A soft launch is being made in Germany at Hamm Hindu Temple festival on 24th June. On Vadali IPTV Box it will be possible to watch IBC Tamil TV, IBC Music, IBC Comedy, IBC Bakthi - and the upcoming kids channel "IBC Malalai", upcoming Christian channel "IBC Siluvai" and upcoming news channel "IBC News 24x7".
It is currently not known if any other Indian Tamil channels will be available on this box too. The price of the box is also unknown, but it will be free for IBC Neyar Mandram members.

An official launch with more details etc. will be announced on IBC media in the near future.

With the launch of their own IPTV box, London Tamil Media Ltd. will not be dependent on any other companies regarding the distribution of their current and upcoming channels. 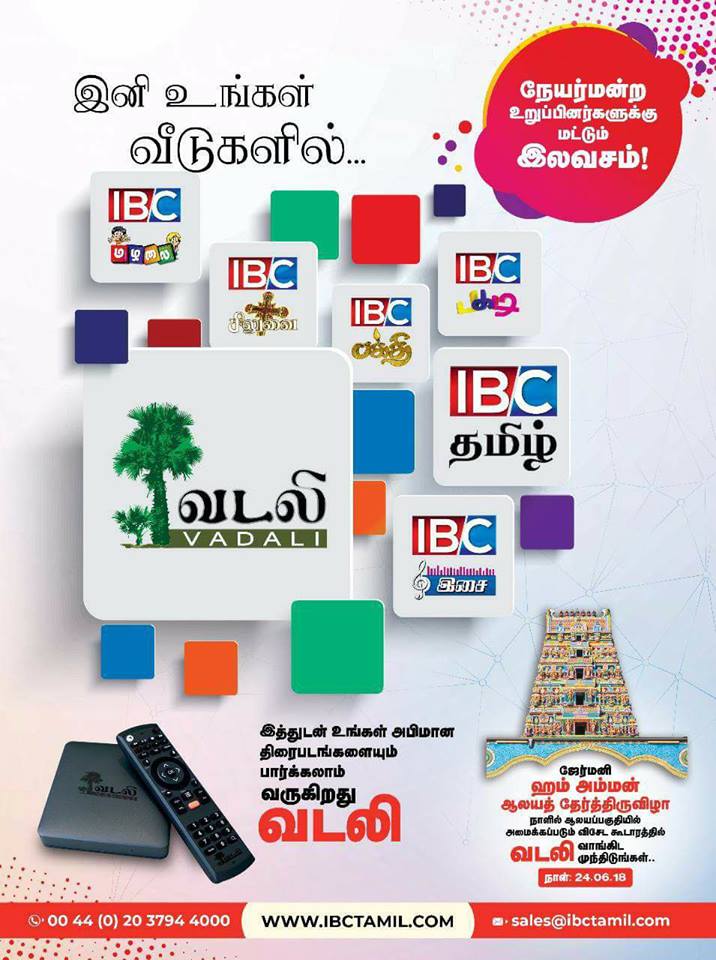